Beards are back. Take a walk down the main street of Beechworth today, and you’ll see everything from your Hemingway sea-captain-look to your full-length bushranger. In fact, in terms of beards, Beechworth is starting to resemble the gold rush of 1852. And back then, as now, the beards weren’t all about practicality: for when a man grows a beard, he cultivates a style and attitude to go with it. 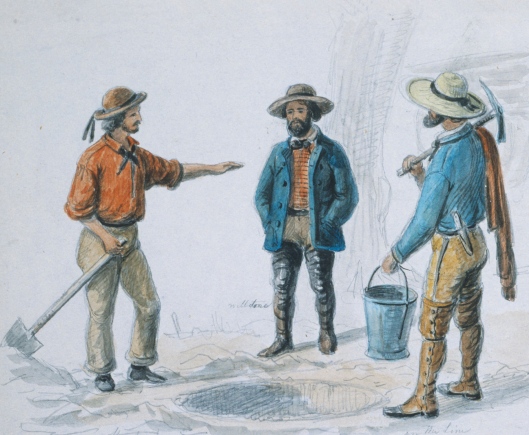 It’s certainly true that on the gold diggings, growing a beard was more practical than attempting to shave, and yet beards were also emblematic of a man’s transformation from ‘new chum’ to digger. As a journalist in the Geelong Advertiser explained of an early scene on the Ballarat diggings, ‘Shaving is entirely dispensed with – all have turned ‘beardies’; soaping a chin, might lose a “nugget,” so beards luxuriate, and a ferocious crop of moustaches are coming on… Everyone is transmogrified, and the scene whirls on as though it were a dream or a phantasy.’ [1]

As historian Robyn Annear has observed (in her awesome book Nothing But Gold: The Diggers of 1852) the beard was not simply a practical response to working conditions but involved the conscious cultivation of a particular sartorial style [2], which today we might think of as ironic. Diggers were quite conscious of their own changed appearance, and some cultivated this change more than others. Englishman Edward Ridpath was clearly enjoying his own ‘transmogrification’, when he wrote from Spring Creek:

A resident of eleven months at these diggings has made some alterations in my appearance, it may perhaps raise a smile on your countenance on telling you that, by strangers with whom I have accidentally conversed, I have been mistaken for both a German and an American!! I am certain that if I walked into your house, till I spoke, you would not know me, my hair, beard, and moustache are of eleven months growth, I wear a broad brimmed crab hat, blue serge shirt, moleskin trousers, a pair of Indian rubber knee boots, and a belt with a bowie knife attached thereto, the incognito would be further aided by seeing a short black clay pipe in my mouth. [3]

Beards and long hair, like the Bowie knife and pipe, were a part of an overall ‘look’ that was an outward expression of freedom and independence. As Thomas Woolner — a Pre-Raphaelite artist who came to Spring Creek in November 1852 with the dream of striking it rich, or at the very least, temporarily escaping London’s caustic art critics — explained,

One can scarcely tell without looking closely that he is not in England. Everything seems arranged in much the same way: the people are the chief difference. They mostly wear beards, carry firearms and are immensely independent: they dress something like the prints you have seen of the red French Republicans, much of that loose air and swagger. [4]

(Meanwhile, back in London, fellow artist Dante Rossetti practically begged Thomas Woolner and his friends for hand-drawn selfies ‘in your present disguises’. Rossetti expected nothing short of a ‘metamorphosis’ to have taken place. [5])

While some diggers dressed more flashly than others, in general, their style promoted social equality. In this context, hirsuteness — especially in the form of a shaggy beard — was a social leveller, and a symbolic release from social expectations. As Seweryn Korzelinski said of his fellow diggers,

…their outward appearance does not signify their previous importance, worth or mental attainments. A colonel pulls up the earth for a sailor; a lawyer wields not a pen but a spade; a priest lends a match to a Negro’s pipe; a doctor rests on the same heap of earth with a Chinaman; many a baron or count has a drink with a Hindu, and all of them hirsute, dusty, and muddy, so that their own mothers would not be able to recognise them. [6]

I’m uncertain whether the spirit that went with growing a beard in 1852 compares to the current resurgence in beard-growing today. I have a feeling that today’s beards are nostalgic for earlier times when men had (or are imagined to have had) greater freedom. One thing I can say: right now, a bunch of blokes I know are having a beard-off; a competition to see not who can grow the longest beard, but simply who can keep a beard the for longest time, and not cave into pressure to shave. And yes, they do have something of a loose air and swagger.