Sometimes a small, seemingly insignificant part of the historic record can provide a window into another world, given fresh insight. This week, hearing a talk by ecologist Matt Herring about Brolga conservation provided a new lens through which to view our history. 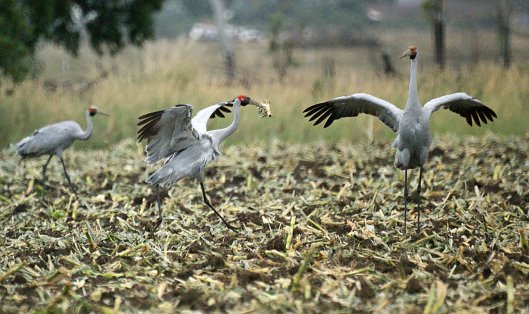 Brolgas feeding in one of their favourites, corn stubble. (Image: Ian Sutton, via Wikimedia commons.)

‘In one of the adjoining paddocks, within view of the house, the “native companions” resort, frequently eight or ten together. They are very tame, and stand very erect on their long legs; their weight, when shot, is from 18 to 23 lbs. each, with feathers.’ [1]

So wrote Mary Spencer into her diary one February day, during her stay at Bontharambo Homestead (belonging to squatter Joseph Docker) in 1855. Although I’d read it a dozen or so times, it remained relatively meaningless to me, until last Wednesday when I attended a talk by ecologist Matt Herring, arranged by Corowa Landcare to launch their booklet (authored by Matt): Brolga Breeding Habitat — A Guide to Managing Wetlands on Your Farm. [2]

Matt’s talk was about the conservation of Brolgas (Antigone rubicunda), particularly their breeding and flocking habitats. In truth, I was only attending his lecture because my partner Scott Hartvigsen went to university with Matt, and they have worked together in field ecology. When I arrived to hear Matt talk, my ignorance about Brolgas was so dense I wasn’t even aware that they were a member of the crane family, let alone that they stand almost 1.5 metres tall and have massive wingspans — often over 2 metres. All I knew for certain was that they were a large bird found somewhere ‘up north’, and that they are celebrated for their spectacular courtship dances, especially in Aboriginal cultures throughout the country.

By the end of Matt’s talk, I had learned that not only do Brolgas breed in wetlands close to Yarrawonga, Benalla and Ruthergen, and in the southern Riverina in places like Urana, Jerilerie, Boree Creek, Lockhart, and The Rock (to name but a few localities), but also, that until recent decades Brolgas were found in many other places, including at Towong on the Upper Murray. Unfortunately, destruction of their favourite habitats has dramatically reduced their range. This especially includes the destruction of their specialised breeding habitat of ephemeral shallow wetlands, which are sparsely treed and have low vegetation like Eleocharis Spike-rushes and cane grass, allowing the Brolgas to have a panoramic view of the area around their island-like nests.

However, the point of historical illumination that I gained during Matt’s talk is that Brolgas were formerly known as ‘native companions’ (because they are quite happy to live alongside people, historically with Aboriginal people). [3] When he said these words, I suddenly realised what Mary Spencer had been writing about in 1855: that Brolgas had once flocked on the banks of the Reedy Creek, just above its confluence with the Ovens River at Bontharambo, north of Wangaratta, in paddocks adjoining that homestead. Moreover, Mary’s description of ‘their weight, when shot [being] from 18 to 23 lbs. each, with feathers’, suggests that folk at Bonthrambo did more than just admire their native companions, they ate them: ‘many consider them very nice for the table.’ [3b] (Incidentally, Brolgas are now described as weighing 6-7 kilograms, rather than the 8-10 kilograms as stated by Mary Spencer, which possibly tells us that Europeans have shot the larger-size birds out of existence.)

This knowledge of Bontharambo Homestead as a site for flocking Brolgas, put a new slant on what is already known about that site locally: that it has a corroboree ground, situated on an island in a permanent billabong known as ‘Stable Lagoon’. [4] Although it is not my role to say who used this corroboree ground, the field notes of Chief Aboriginal Protector George Augustus Robinson, which he wrote on multiple visits to Bontharambo in the early 1840s, records him as meeting mainly Waywurru, Bpangerang (which he calls ‘Pinegerine’) and Taungurung people at Bontharambo. [5]

Brolgas are long-lived, and are habitual in their travels. When Mary Spencer said that the Brolgas ‘resort[ed]’ in the paddock near the Homestead, she meant it in the nineteenth century sense of the word: that it was the birds’ custom to repeatedly visit and enjoy this place. As both sexes of Brolgas dance year around, in pairs, or in groups with birds lining up opposite each other, it seems worth considering that the Bonthrambo Homestead site was sometimes shared by at least two groups who used it as a space for formation-styled dancing: humans and birds. Perhaps a pre-existing familiarity between the Brolgas and the Aboriginal people at Bontharambo may even explain why the birds seemed ‘very tame’ to Mary Spencer.

While the Brolgas and humans shared space for dancing at Bonthrambo, humans and birds have also shared music. Earlier this week, I was listening to the 2016 Lin Onus Oration, delivered by Bruce Pascoe from the Bunurong clan of the Kulin nation, and author of the stunning book Dark Emu. In this lecture, he tells a story about Lyrebirds (Menura novaehollandiae), which are known for their ability to mimic the songs and sounds of other birds and other noises. Pascoe says that at some present-day Aboriginal ceremonial gatherings, lyrebirds have been heard mimicking the sound of Aboriginal clap-sticks made during the ceremonies. Scott Hartvigsen pointed out to me that the ability of lyrebirds to learn ‘songs’ from human sources, and pass these down through the generations, has been well-documented in the case of the ‘flute lyrebirds‘ of  the New England tablelands:

‘A lyrebird chick was raised in captivity in the 1920s in Australia’s New England Tablelands, or so the story goes. The bird mimicked the sounds of the household’s flute player, learning two tunes and an ascending scale. When released back into the wild, his flute-like songs and timbre spread throughout the local lyrebird population.’ [6]

Bruce Pascoe notes that the ‘clapstick sound’ of Australian ceremonial gatherings has actually become the ‘default’ call for lyrebirds, and he thinks that this originates in the birds having listened to, and mimicked, the sounds from ceremonies since time immemorial, and having remembered and passed on these sounds, down through countless generations. Thus, anywhere lyrebirds are found, they continue to remind us of Aboriginal ceremonial practices, even in the absence of such practices.

In future I will always listen out for the birds as I read the journals, diaries and letters of early explorers, squatters and gold seekers. Their authors often mention the birds they hear and see only in passing. The people say one thing, but the birds may be telling us something altogether different: something about meaningful cultural relationships between birds and humans.

[2] Matt Herring, Brolga Breeding Habitat — A Guide to Managing Wetlands on Your Farm, Corowa and District Landcare, second edition, May 2018.

[4] pers comm. David Nicholas Moore, 24 May 2018. (David is a cousin to Mary Paul nee Docker, who lives at Bonthrambo.) This is further supported by information in J.M. McMillan, The Two Lives of Joseph Docker, Spectrum Publications, Melbourne, 1994.

[5] This statement is not to be construed as meaning that the land ‘belonged’ to either one group or the other, it is simply a statement of the Aboriginal peoples Robinson met with most frequently at Bontharambo. The question of ‘whose land?’ has been covered in a comprehensive review and detailed analysis of George Augustus Robinson’s journals and other similar early source materials, including a statement of this area being a ceremonial site, had been explored extensively in Marie Hansen Fel’s unpublished technical report ‘These Singular People — The Ovens Blacks, Supplementary Report,’ 28th July 1997. However, on the 11 February 1841 Robinson wrote from Bontharambo, ‘The Pinegerines are going away to their own country’, which suggests that while the Bpangerang were visiting Bontharambo plains, it was not ‘theirs’.

[6] These ‘flute lyrebirds’ have been discussed in numerous academic sources, for example, in Powys, Vicki, Hollis Taylor, and Carol Probets. ‘A Little Flute Music: Mimicry, Memory, and Narrativity.’ Environmental Humanities, 3 (2013): 43-70.