Anyone living on the Spring Creek diggings at the height of the gold rush in late 1852 put themselves at risk of serious and potentially fatal illness. Dysentery, ophthalmia (trachoma), and infection from injury were commonplace, as was an unidentified and often fatal illness described as ‘low fever’. This led me to wonder exactly what medicines the gold diggers had to treat illness, and more importantly, if any of them actually worked. 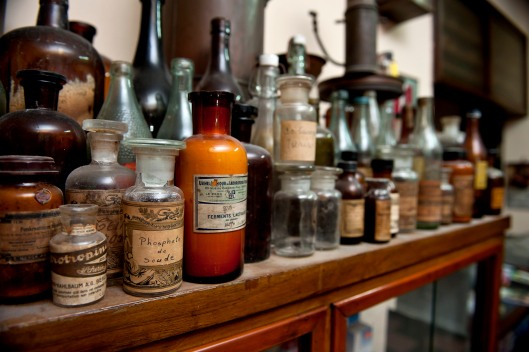 (This post is quite long, so I have put each medicine in bold type to allow you to skim read.)

Let’s start with what seems to have been the most commonly sold item for the gold digger’s medicine chest: the laxative Senna leaf. On one hand, the gold diggers’ diets lacked vegetables and fibre, so they must have suffered terrible constipation; and on the other, dysentery was probably the single biggest medical issue on the goldfields. Accordingly, almost everything the gold diggers could buy to ‘physic’ themselves worked to relieve bowel problems or stomach upsets of one kind of another (either indigestion, constipation, diarrhoea or flatulence). You can still buy Senna leaf laxatives in the supermarket today.

The next two most common items seem to have been Laudanum (a tincture of opium) and Powdered bark. Although one might imagine that the Powdered bark so commonly advertised was willow bark (from which Aspirin was synthesised in 1853), it was in fact the bark of the Cinchona tree (hence its other name, Peruvian bark), which contains Quinine. This was both anti-malarial and more significantly for the Victorian gold diggers, antipyretic (fever-reducing). Quinine is still used medically today, and you’ll also find small quantities of it in tonic water.

Laudanum was a powerful analgesic (painkiller), and could also be used as a sedative. (Battley’s Liq. Opii Sed. [ie: “Liquor Opii Sedativus”] — a patented preparation of macerated opium in distilled water, preserved with alcohol — was advertised specifically as a sedative.) Although it is not openly stated, Laudanum may also have been used as an antipropulsive medicine as it slows down the movement of the gut, which could have been beneficial in cases of acute diarrhoea. Another opium-derived drug, Morphia (Morphine) would become more popular after hypodermic syringes were invented in 1853, and has been in use ever since.

A detailed advertisement by a Chemist warehouse in the Geelong Advertiser (Friday, 10 January 1851, p.1) addressed ‘to settlers, bush surgeons, storekeepers, others’ provided a substantial list of its stock, which enables me to expand this basic list of medicinals. All of the medicines (even patented ones) were either chemical compounds, or herbal — in which case they were sold either in a raw form, such as bark, leaves, roots, balsams (resinous saps), and seeds; or as processed plant materials in the form of oils and tinctures. There were also patent medicines, the most famous of which was the cure-all Holloway’s Pills.

Given that almost everyone on the goldfields experienced dysentery, people also took various herbs to reduce the severity of digestive problems. Cape aloes (Aloe vera) was taken to relieve digestive discomfort and Caraway seeds and oil were thought to help with intestinal irritation and digestive problems. Peppermint oil could be used to settle the stomach and combat flatulence. Other digestive tonics included Gentian root (Gentiana lutea) now found in Angostura bitters; Cascarilla bark (Croton eluteria), which was often made into a tincture as a digestive tonic, stimulant and fever reducer, and today is used to flavour the digestif Campari and the apéritif Vermouth; and Columbo root (Jateorhiza sp.) and Angostura bark (Cusparia febrifuga) were both used as tonics. I wondered why Ginger wasn’t sold at chemists for the purpose of calming the stomach, but this is probably because it was so widely available in Ginger Beer.

Clove oil, an analgesic and antiseptic, was used to relieve the pain of toothaches, just as it is today. Myrrh balsam (a resin obtained from the Commiphora myrrh tree) was likewise used as an analgesic for toothache, and as an antiseptic in mouthwashes (in a tincture with borax), throat gargles and toothpastes.

Various herbal preparations were used as topical skin treatments, either for their anti-inflammatory, antibacterial, anti-fungal and/or anti-puritic (anti-itching) properties. Lavender oil is mildly antiseptic, as is Myrrh and possibly Burgundy Pitch — a resin from the Pini burgundica tree. Peppermint oil or tincture of peppermint could be used topically as an anti-puritic because it is cooling, and Cape aloes (Aloe vera) was also employed for its soothing effects. However, it is likely that one of the most popular preparations was Friars balsam, now commonly referred to as Compound Benzoin Tincture. This contains Benzoin (the resin that is exuded from the bark of the Styrax benzoin tree), Cape aloes, Storax (Liquidamber resin) and sometimes Tolu or Peru balsam (obtained from the Myroxolon balsamum tree). Compound Benzoin Tincture’s main medical use is still as a treatment for damaged skin, as it can be applied to minor cuts as a stypic (stops bleeding) and antiseptic (an effect of both the benzoin and its alcohol solvent). It is technically a ‘medical varnish’ forming a sealing over raw tissue to protect wounds from ingress of bacteria (but by the same token it can ‘seal in’ bacteria). Applied to itching and inflamed areas of skin, it reduces inflammation and calms and cools. Applied to broken blisters, cracked nipples, anal or heel fissures, or even chillblains, it protects against infection and promotes healing.

Muscle aches and pains, sprains and rheumatism could be relieved with liniments incorporating Burgundy Pitch, Camphor (from the wood of the Cinnamomum camphora tree) and/or Myrrh. Also in common use were mustard plasters — a poultice of mustard seed spread inside a protective dressing and applied to the body to promote healing. It would warm muscle tissues and was used for chronic aches and pains.

Treatments used to relieve the symptoms of cold and flu included Camphor, often appearing as Camphorated spirit of wine (a tincture of camphor), which along with Peppermint oil (from which menthol is derived), was used as a nasal decongestant. These are still used in steam vapour products today. Both Aniseed oil and Spanish liquorice (Glycyrrhiza glabra) were probably used as expectorants to loosen up and liquefy mucus. As a stimulant to mucous membranes, Cascarilla bark was also used as an expectorant. Tolu balsam, tapped from the living trunks of the South American tree Myroxylon toluiferum, is still used in certain cough syrup formulas. Plain Tincture of Benzoin was also inhaled in steam as a treatment for bronchitis and colds.

Lavender oil was used for treating headaches; and along with Camomile purchased as dried flowers, was thought to help relieve insomnia and stress.

Trachoma (a contagious bacterial infection of the eye) was a huge problem on the goldfields, so Dr Parke’s Eye Lotion, and Russell and Turner’s Celebrated Eye Water, would have found large markets, despite the fact that they were probably ineffective. I have no idea what went into them.

Although advertised as a treatment for consumption (tuberculosis) and ‘general debility,’ Cod liver oil was actually useful in preventing rickets in children because of its high levels of Vitamin D.

One medical idea that no longer holds currency is the notion that purging people with emetics (to make you vomit), and diaphoretics (to make you perspire), could halt the advance of fevers. The Ipecacuanha powder (obtained from the dried rhizome and roots of Carapichea ipecacuanha) that was used for this purpose, is still used as an emetic today in the syrup form, Ipecac. Along with Opium, Ipecacuanha was the other key ingredient in Dover’s Powder, designed to induce vomiting and sweating. James’ Antimonial Fever Powder was yet another proprietary medicine which induced vomiting and voiding of bowels. When taken in large doses, Angostura bark also caused diarrhoea, and so was often used as a purgative. With its diuretic, diaphoretic, and antispasmodic properties, Spirit of Sweet Nitre — a tincture of ethyl nitrite — was also used.

Chemists of the day also sold ammonia-based smelling salts to arouse consciousness such as Sal Volatile, and similarly, Spirit of Hartshorn — a distillation of horn shavings that produced ammonia, in a tincture.

Treatments for venereal disease comprised the toxic Calomel (Mercury(I) chloride): yet another purgative and laxative that was both taken internally and used topically to treat syphilis (it may have been more useful topically, as Mercurochrome is also mercury-based). Copaiba balsam, a stimulant oleoresin tapped from the trunk of South American Copaifera tree, was taken as a liquid, as it was thought to the sooth inflammation caused by gonorrhoea. Sarsaparilla Root (Smilax regelii) was also believed to be a treatment for or preventative against venereal disease, possibly because of its diuretic effects of flushing the urethra after intercourse. (On a related note, the first rubber condom would not be produced until 1855.)

Finally, in 1852 you could buy the general anaesthetic Chloroform over the counter… and hope no one would ever have to use it, as aseptic conditions for surgery (partly through the use of Phenol), would not be developed for at least another twenty years.