Have you ever heard of Beechworth’s ‘Emerald Casacades’? No? Neither had I. This week I went search of a once much-loved beauty-spot that has since ‘disappeared’, and speculated on its indigenous associations. 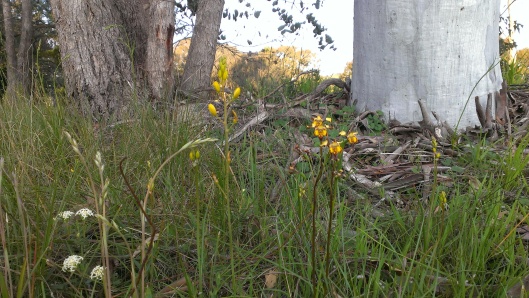 Remnant grassland on the Beechworth golf links, Balaclava Road. These grasslands were once home to numerous wildflowers, including tiger and golden moth orchids, as well as bulbine and chocolate lilies.

WARNING: Visitors should be aware that this blog post includes images and names of deceased people that may cause sadness or distress, particularly to Aboriginal and Torres Strait Islander peoples.

In my last post, Were Aboriginal people in Beechworth in the 1850s?, I drew upon a newspaper account of a clan of about 25 Aboriginal people who came to visit Beechworth in 1859. [1] Just after I published this post, a helpful reader alerted me to a second account of the same group of people visiting the year before. This news report from 1858 describes nightly corroborees, which the group performed not for White onlookers, but purely for themselves [2]. Both visits to Beechworth seem to have come at the end of Summer/early Autumn, and the group is said to have camped near the racecourse — which, by this time, had moved from Pennyweight Flat to what would become known as ‘Baarmutha Park’. There is also a strong suggestion that a camp at Beechworth was a part of the annual cycle of moving through country: ‘They pay periodical visits to every part of their district, always reaching Beechworth about the time when the races come off’. [3]

A painting by local Aboriginal artist Tommy Mcrae (late 19th century). The men have painted bodies and boughs tied to their legs, just as the Aboriginal men did at their corroborees in Beechworth in the 1850s. [Photo credit: State Library of NSW]

In the 1858 article, the journalist implies (quite clearly as a derogatory device) that these Aboriginal people camped near the racecourse because of the proximity to the horse racing, which translated to White people plying them with ‘firewater’. However, I had to ask myself whether the area near Baarmutha Park (now mostly taken up by the golf links) might have been a preferred campsite for these Aboriginal people well before the racecourse even existed.

If the remnant vegetation on the golf links is anything to go by, the Baarmutha Park area was once an area of open grassland filled with orchids, lilies and other wildflowers, and shaded by huge Brittle Gums (Eucalytus mannifera). The microclimate would have been more welcoming than the banks of Spring Creek, the depression of which attracts cold air. And yet I still had to ask myself, what, if anything else, made the Baarmutha Park area special? 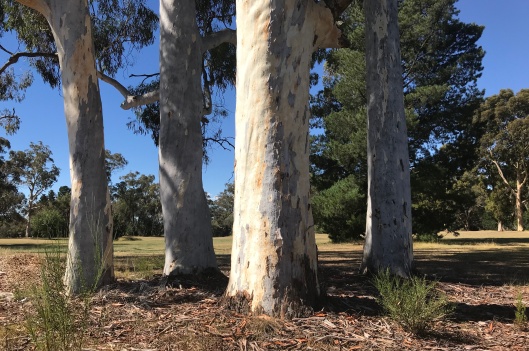 Mature Brittle Gums on the edge of the Beechworth Golf Course, Balaclava Road.

Then, a few days ago, I came across a letter in the Ovens and Murray Advertiser from 1907, in which ‘A Lover of Beechworth’ expressed their dismay at the ‘wholesale destruction of ornamental trees which is going on in the immediate neighborhood of Beautiful Beechworth.’ The ornamental trees to which the writer was referring were mature native trees at several sites, which included ‘probably the most delightful spot in the neighborhood of Beechworth… what was called the Cemetery Creek, but which has been more appropriately styled the Emerald Cascades …’ [4]

As residents know, this charming locality is at the rear of Baarmutha Park, and consists of a wild glen. The well-worn path charmingly follows the parting stream of crystal water, which leaps from cascade to cascade for at least a mile, between cool-looking, moss-covered rocks. On a hot summer morning this glen was a most inviting scene for the painter, owing to the rare color effects that were produced in the natural objects from the bright sunshine, which with difficulty glanced through the clefts of the dense and beautifully disposed eucalyptus and pines, dappling the deep green moss and grey rocks with its glories. No one ever visited it who did not loudly praise its wonderful coolness or its delirious shade.

Was it this shady glen just behind Baarmutha Park that was the real added attraction of camping here? The letter-writer went on to explain that on a recent visit to the site, they had found that the trees, ‘which were the cause of all this charm, were all rung and fast dying! In a year they will be dead and falling, and nothing will be left but a bare, bold blazing mass of rocks.’ They complained that whoever had ringbarked the trees had no excuse — it was simply wanton damage.

I’d never heard of these ‘Emerald Cascades’, and so set set-off from Alma Road, to scope the creek-lines (fed by run-off from Red Hill), in behind Sorrenberg Vineyard and the ‘extra cross-country loop’ of the Beechworth Mountain Bike Park. Of these, the creek most likely once designated ‘Emerald Cascades’ is dotted with large rocks and boulders, and steps down into something of a ravine. Unfortunately, the creek-line has been invaded by a Pittosporum (a non-native to this area; some of enormous size), while the former ‘cascades’ are now buried beneath a sea of blackberries. The few ferns (two species of Blechnum, and a couple of Tree ferns) which survive, along with the occasional boulder that remains visible and mossy, provide the only suggestions as to the area’s former emerald-green beauty.

And what were the trees that the anonymous environmental vandal/s ringbarked all those years ago? There are still some mature Black Cypress Pine (Callitris endlicheri) along the creek, as well as numerous Red Stringybark (Eucalyptus macrorhyncha). There was also a young Kurrajong (Brachychiton populneus) on the creek, and closer to the golf links, remnant Broadleaf Peppermint (E. dives) — a species which may have also once grown closer to the creek. We can only guess at what ancient specimens are now missing from the site. Sadly, these days, it is a real stretch to imagine that this location was once considered one of the town’s best-loved natural attractions. However, even today, the site still retains quite a few Persoonia rigida (Hairy Geebung) and Exocarpos cupressiformis (Cherry Ballart or Native Cherry), which means that in season, it would have once been a good place to pick native fruits.

On a final note I am also drawn to ask whether it was the memory of the regular usage of the Baarmutha Park area by Aboriginal people that led to its naming. When official names were being discussed ahead of the Boxing Day Sports in 1880, the Ovens and Murray Advertiser wrote, ‘What better, prettier or more appropriate title could it have than that of Baarmutha Park? Beechworth itself did not originally retain its native name… Beechworth [as a name] has become endeared to us by many proud and tender associations, [but] scarcely anyone knows where the name comes from or who conferred it. The aboriginal word may, however, be perpetuated by attaching it to the public park…’ [5] It might be something to investigate further, but for now it may suffice to note that of all the places in Beechworth that could have been chosen to ‘perpetuate’ the original Aboriginal name for the area, ‘Baarmutha Park’ might just have the strongest indigenous associations.

If you have any thoughts or something to add, please comment.