In the last week or so, there has been widespread community interest in, and concerns over, the inadvertent commemoration of ‘pioneers’ who were responsible for massacres of Aboriginal people (in light of the Black Lives Matter protests). Locally, this is seen in place names, including Faithfull Street in Wangaratta (named for George Faithfull), and the Warby Ranges (named for Benjamin Warby), to name just two of many examples. As people think of renaming places, there has been a corresponding interest in original Aboriginal place names. I am publishing this list of original local place names (below) as an addition to Megan Carter’s larger list. You can find this list on her blog at: It’s all in a name: a resurfaced collection Aboriginal place names in North East Victoria

In 1858, District Surveyor A. L. Martin, who was based at the Survey Office in Beechworth, supplied a list of local place names to the Surveyor General in Melbourne. These were ‘native names which I have been able to learn from a gentleman who has resided a considerable time in this District.’ [1] (I speculate either David or Curtis Reid, who were among the first non-Aboriginal people to settle in the area, and were still in the district in 1858, as likely candidates).

Currarrarbyandigee — the township of Wangaratta

On 23 February 1841, Chief Protector George Augustus Robinson recorded in his journal place names collected from local Aboriginal people, whom he spoke with while at Bontharambo station. One of these names, for the junction of the Ovens and King Rivers, was ‘Corram-beyan-didder’. This easily corresponds with ‘Currarrar-byan-digee,’ supporting the authenticity of this place name for Wangaratta, and more specifically the river junction area.

I also find it especially interesting that ‘Moyhu’ is an original Aboriginal name, which puts a convincing end to the myth that it was derived from two Chinese men, Ah Moy and Ah Yu! Likewise, as you will see on Megan’s list, Edi is also an original name, and os not a foreshortened version of ‘Heide’ as one finds as a dubious explanation in some local histories.

Finally, Aboriginal people often had multiple names for one water course, as they named them in sections.

So what do you prefer: Everton or ‘Bya-la-garngee’? Faithfull Street or ‘Corram-byan-diddah Street’?

I have sighted a copy of the original letter as an appendix in Marie Hansen Fel’s unpublished report ‘These Singular People — The Ovens Blacks’, 1997. Fels did not provide a full bibliographic citation, but I would suggest the letter is held in either of these files:

This is original written content that is copyright protected to ©Jacqui Durrant, 2019. You are welcome to share links to this blog, but please do not use the content elsewhere without permission. Thank you!

When most of us think of how gold was mined ‘in the olden days’, we think of a solitary miner washing dirt in his gold pan by the side of a creek. After that, the confusion and mythology sets in. In order to help simplify matters, this week’s post presents a list of mining methods and equipment NOT used during the Spring Creek and Reid’s Creek (Beechworth) gold rushes. 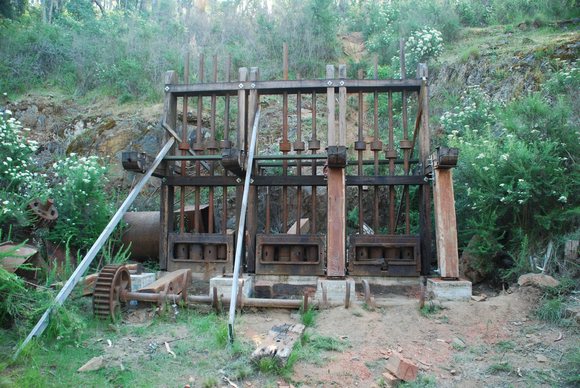 12 Head Stamp Battery at the Wallaby Mine (Image: Heritage Victoria)

Yes, I’m a grumpy historian. I get really annoyed when people ‘conflate’ (combine) different historical periods into one. The Victorian gold rushes are often conflated with later periods of gold mining, but the reality is that the major gold rushes of the era (which took place in Ballarat, Bendigo and Beechworth districts) belonged to a short period of time (1851-53), in which people used particular equipment and had a particular mind-set.

One of the most exciting and attractive things about the gold rushes of the 1850s was that anyone with a small amount of capital and a few friends or acquaintances, could stake a claim and mine gold using basic equipment. Contrary to popular belief at the time, gold wasn’t easily-won (it involved hard labour), but the great virtue of the gold rushes was that anyone with a reasonably strong physical constitution could become a ‘gold seeker’. At the height of the Spring Creek and Reid’s Creek gold rushes, which took place over a few months in the late Spring and Summer of 1852-53, no large scale mining equipment was used.

So here are some mining techniques and equipment that had nothing to do with the gold rushes:

Hard Rock Mining / Stamp Batteries — Hard rock mining did not begin in the Beechworth/Yackandandah area until all the (comparatively) easily-won alluvial gold was exhausted. The gold bearing quartz was crushed using stamp batteries. There’s a massive stamp battery at the Wallaby Mine, restored after the 2003 bushfires by Parks Victoria. There are other stamp batteries to be seen at Myrtleford and Bright. (Picture above.)

Gold Dredging — Gold dredges were used to dredge gold-bearing sands from creek and river beds, and process them. There’s a spectacular ‘bucket’ dredge at Eldorado. If you haven’t done so already, I suggest you go see it; and remember, this machine began operating in 1936, long after the gold rush had finished.

Open-cut sluicing — Some large open-cut mines existed in the Beechworth and Eldorado areas, in which gold bearing soils were broken down for processing, using high-powered hoses. The ‘clay banks’ on the side of Lake Sambell in Beechworth are the visible remains of one such open-cut mine, run by the Rocky Mountain Gold Sluicing Co, which formed in 1867. The pit which became Lake Sambell was the result of large-scale company mining, which started (in this case) 15 years after the gold rush. 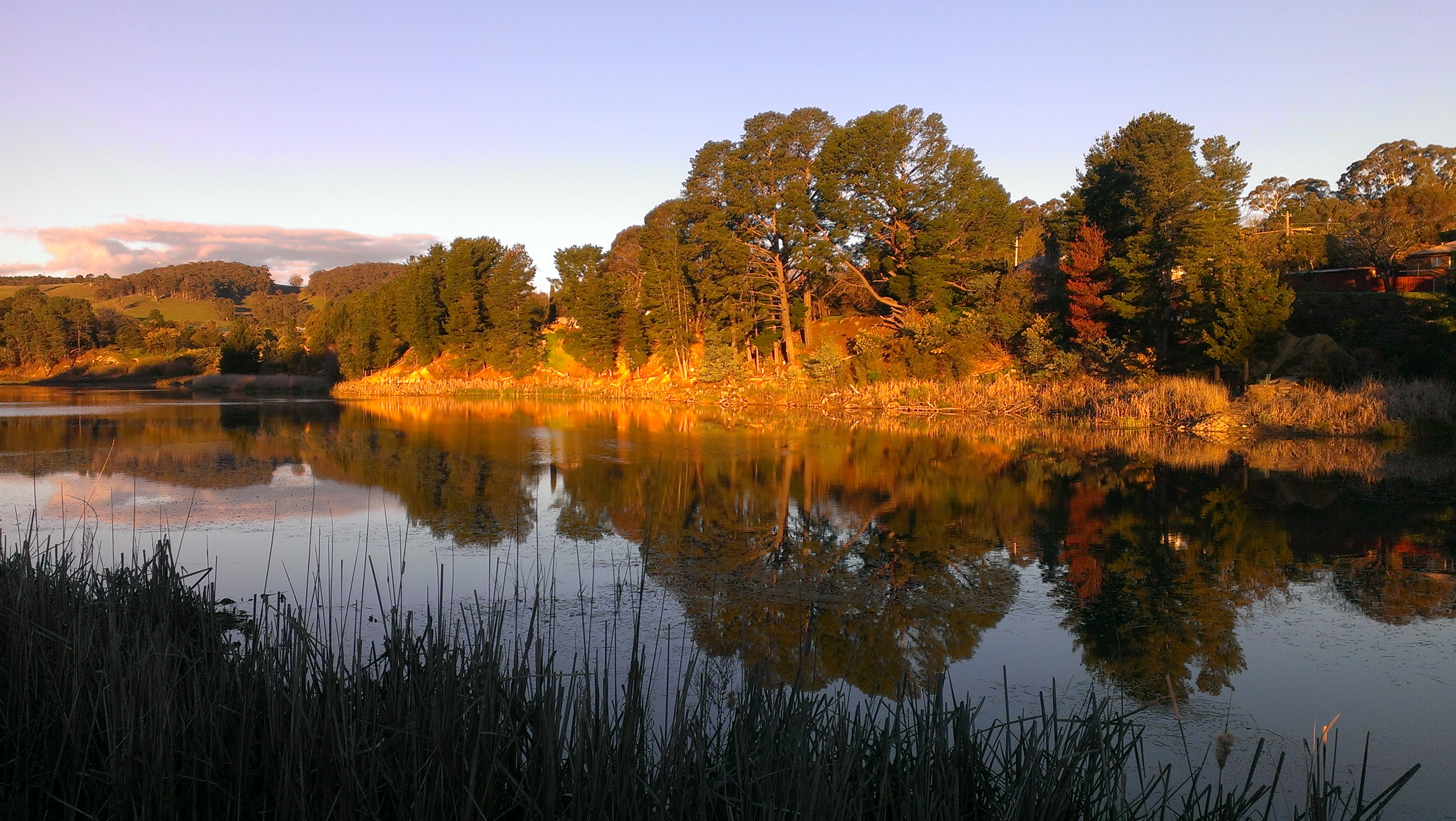 Pine trees growing on the exposed ‘clay banks’ left by gold sluicing operations, on the side of Lake Sambell, Beechworth (Image: Jacqui Durrant)

In the next post, I will return to the 1850s and talk about how gold was mined during in the gold rushes, considering the different conditions on the Spring Creek and Reid’s Creek diggings. And I will be less grumpy.