High Street in Beechworth has been a lot of things, but was it really ever Beechworth’s ‘main street’?

I have a ‘thing’ about High Street. For one, I live on it. For another, it’s the most historically significant street in Beechworth, seconded only by Buckland Gap Road. Some joke it has a ‘Paris end’ and a ‘Bohemian end’. A lot of people will wax lyrical about it having been ‘Beechworth’s original main street’ — but for a nit-picking historian such as myself, this is a vast oversimplification.

Survey of Beechworth, lithographed from the original 1853 map in 1855. (State Library Victoria)

High Street runs along the high side of Spring Creek, and it was the main thoroughfare for the gold diggings during the gold rush. I suspect that High Street was a originally a shepherd’s track, as there was a shepherd’s hut on the Creek at the time gold was first discovered there in the Autumn of 1852. [1] More over, that shepherd’s track might well have overlain a well-trodden indigenous track. It wasn’t unusual for roads that were created before formal surveys to follow ancient Aboriginal pathways; it’s well-known, for example, that major thoroughfares like George and Pitt Streets in Sydney follow the footpaths created by the First Australians. [2]

In any case, High Street was a track along the high bank of the creek which lead to the Commissioner’s Camp: a make-shift government administrative centre which was erected in late October 1852. At the time, it was not a street so much as an ill-defined path: ‘and so close were the [miners’] holes to each other,’ explained Mrs Campbell who arrived in mid-1853, ‘that there was hardly room for our cart to pass between them, obliging us to make a constantly zig-zag track.’ [3] 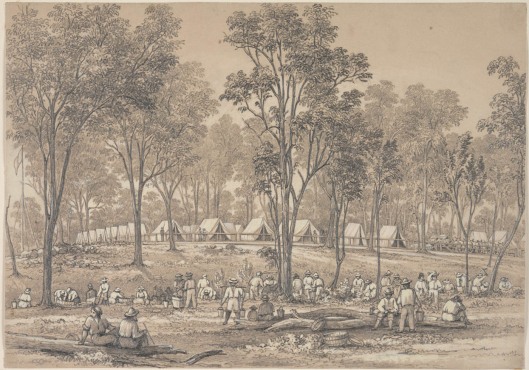 The Commissioner’s Camp at Beechworth, by Edward LaTrobe Bateman (drawn around late December 1852). The path that became High Street can be seen just in front of the tents. The vantage-point for this view is best imagined as being from the Creek between current day Tanswell and Billson Streets, looking north.

In January 1853, at the peak of the gold rush, The Argus reported that ‘The site of a new township has been decided on in this neighbourhood, it will occupy the space on the side of Spring Creek between the upper waterfall and the Commissioner’s Camp.’ [4] In March, a deputation of storekeepers (Messrs C. Williams, C. Haskell, A. Palmer, and R. Mellish), who were keen to erect ‘winter stores’ on marked allotments before the cold weather set in, were assured by Chief Commissioner Smythe that they could do so as soon as allotments were marked out, and that the value of their improvements when the land was sold would be secure. [5]

When the town was finally surveyed in June, High Street appeared as just an idea of a street modelled on the reality of the existing path that followed the Creek (see illustration above). The path divided up at the north-east end, to head north to the Reid’s Creek diggings (and Albury), and south to Stanley, with a four-way junction roughly where Junction Road is today (see illustration below). Of course, you can try taking this same path to Stanley today (by heading down Peach Drive), but these days you’d have to swim the first leg across Lake Sambell, where on the opposite bank you will find what is likely a continuation of the original track in the form of Lower Stanley Road.

A section  of a map of Beechworth in 1856. There’s a bit of a mess of pathways splitting around where Junction Road runs across High Street into Peach Drive today.

In any case, from the outset, Ford Street was the street clearly laid out with allotments on both sides, and made wide enough for a horse and cart to make a ‘U-turn’. In comparison, High Street was left as a track and only had allotments on the northern side, with the creek-side left unsurveyed. It could be argued that of those first ten allotments on High Street, Williams, Palmer and Mellish bought one each, suggesting that they may have actually erected their first stores along High Street. If this was the case, they would have quickly found themselves in exile at what was essentially a grubby part pf town — overlooking a conglomerate of make-shift tents and the diggings themselves. Williams and Palmer had the foresight to hedge their bets by buying land in Ford Street, which presented a more formal aspect. So if ever High Street took precedence as a business district, it was an incredibly short-lived phenomena.

The Ovens Directory of 1857 [6] tells us that by this time, High Street had two pubs, two general merchants (of which Richard Mellish remained one), two wholesale wine and spirit merchants, a tinware shop, a blacksmith, butcher, bootmaker, surgeon, chemist, a solicitor (Henry Elmes), a restaurant, Catherine Hughes’ ‘refreshments’ (no, that is not a euphemism), and even something for the hipsters of yesteryear — local coffee roasters, which all makes it sound as if High Street could have been the main street…. until you compare it with Ford Street at the same time.

In 1857, Ford Street had at least twice as many pubs, nine general merchants, three restaurants, Ackley and Rochlitz: Daguerrean Artists (photographers), at least two drapers, five grocers, a butcher, bookseller and stationer, medical doctor, chemist, tobacconist, bootmaker, two watchmakers, three barbers, and assorted builders, saddliers, ironmongers, blacksmiths, a coach agent, tent maker, and three wholesale wine & spirit merchants! And if one needed any more proof that Ford Street was the big end of town, it was also the location of the Bank of Victoria and Bank NSW. [7]

I’d argue that Ford Street is and always has been the main street of Beechworth — the street designated as the centre of commerce, right from the moment that the town of Beechworth came into existence. By comparison, High Street is merely a path — but what a path! Not only does it pre-date the town of Beechworth, it may even pre-date European settlement. Either way, it is the only true landscape relic of the gold rush of 1852-3 that we have left; a path made by the people, for the people.

3 thoughts on “Exile on High Street”