This blog post presents an eye-witness account of how gold was mined on Spring Creek (Beechworth) in the rush of 1852. If you want to know why the image of the solitary miner gently panning for gold by the side of the creek is a fallacy… read on.

WARNING: This is a monumentally long post. It is broken into headings, to facilitate skim reading and promote a modicum of sanity.

Note: this post is about mining on Spring Creek, which is now referred to on some maps as ‘Silver Creek’, and runs through the modern town of Beechworth.

As I said in my last post, one of the most exciting things about the gold rushes of the 1850s was that anyone with a small amount of capital and a few friends or acquaintances, could stake a claim and mine gold using basic equipment — the design of which had been refined on the Californian goldfields only a few year previous.

By far the best eye-witness account I’ve read of the activity of gold mining during the Beechworth gold rush was written by Edward Ridpath [1], who arrived on the Spring Creek diggings on 4 November 1852. At this point, the diggings were still quite fresh: Ridpath says he was ‘much surprised at their general appearance… that their operations were confined to a spot of ground about one mile in length, and about a hundred yards in breadth…’

An early drawing of the Spring Creek diggings around December 1852, by Edward LaTrobe Bateman. This view is taken from southern side of the Creek looking towards the Commissioner’s Camp, which was situated where the Police Station and Gaol are today (Image: State Library of NSW).

The mining on Spring Creek was ‘alluvial’ — meaning that gold was found in deposits of sand, gravel and soil that had been washed and transported by water. ‘[T]here are two sources whence gold is derived,’ Ridpath tells us, ‘one from the bed of running creeks, the other from the earth’.

Thus, at Spring Creek in early November, Ridpath noted, ‘the first parties that arrived here worked a bed of the creek which had proved uncommonly rich and well rewarded the adventurous discoverers, [and] the soil adjoining was now being tried…’ [2] By the time another Englishman, William Howitt, arrived in mid-December, ‘The creek, that is, a considerable brook, was diverted from its course; and all the bed of the old course was dug up.’

Staking a claim, sinking a shaft

To dig for gold along Spring Creek, Ridpath explained,

the preliminary step is to sink a shaft, which in these diggings varies from 6 feet to 46 feet in depth [i.e.: 1.8-14 metres] according to the nature of the surface, the shape of the shaft is according to the fancy of the digger, whether round, oval, square or oblong, the first is the most used, before sinking, he first marks out by a trench his claim, or ground he is entitled to, consisting of 12 ft square every way, then commences working with a pick and shovel, throwing the dirt up to the surface after picking it, till he obtains a depth of 7 or 8 feet.

Miners had to work their 12 ft square claim constantly, or else their claim was forfeited.

Using a windlass or whip

Once a depth of 7 or 8 feet was reached, ‘a wooden windlass is fixed, [and] the dirt is then pulled into buckets and hauled up.’ A windlass was a structure mounted over the shaft, fitted with a hand-cranked winch, which Howitt explained, was ‘rudely constructed out of the wood that grows about.’ Some miners preferred instead a structure containing a pulley mounted over a shaft, or even more simply, a pole centrally counter-balanced on a forked stick set into the ground, with the bucket attached by rope to one end, known as a ‘whip’. 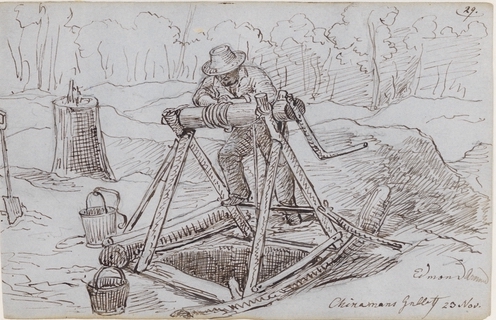 Illustration of a windlass: ‘Edmond Armand, Chinaman’s gully, 23 November 1853’, which appears in A pioneer of the fifties: leaves from the journal of an Australian Digger, 18 August 1852-16 March 1854, drawn by Eugen von Guerard (Image: State Library NSW).

The shaft was dug until the miners hit the layer of wash dirt containing the gold, which Ridpath explains, was found just above

…the rock or pipe clay, the former consists of granite, sandstone, and slate, either rotten or hard, the stratum of earth that lies on this contains (if there is any at all) the gold, the depth of this stratum varies from 6 inches to 7 feet, the latter very rarely, sometimes a stiff clay extends down to the rock, in which no gold is ever found, the technical term for this stratum is washing stuff, its chief colours are red and white, it is strange that although the dirt above this should be free from any hard substance, this is mixed up with pebbles from the size of pin heads to that of a bullock’s, they are of all shapes…

Once the layer of wash dirt was found

…on coming to the rock the digger takes a tin dish full of the washing stuff to try and see if it will pay for his labours in working the whole claim… if, as I said before, there is any encouraging promise, he begins to make a tunnel with a small sharp pointed pick, from the shaft to the boundary of his claim, about four feet wide and three feet in height necessitating him of course to sit like a tailor all the time, this is continued all round the claim in order to secure it from encroachments of his neighbours who will always take advantage of less able work-men than themselves, after this is completed, the rest of the ground is picked away and supported by wooden pillars so that there is a complete excavation, as this is the case with all the claims on the diggings where the ground is good, you might crawl under it for several hundred yards with few interruptions, very much like a rabbit warren, candles are always used in the tunnelling; as the stuff is picked, it is shovelled forward to the shaft, put into buckets, and hauled up…

In deep claims being worked by candle-light, the air would be foul, so ventilation was provided by ‘a windsail, like those aboard emigrant ships, to carry down fresh air.’ This device was simply a sail terminating in a long canvas pipe, rigged to catch and direct breezes.

Howitt tells us that ‘The diggers themselves generally ascended and descended by a rope fastened to a post above, and by holes for their feet in the side of the pit.’

Once the claim had been worked out, with all the wash dirt containing gold brought to the surface and put aside, this was

either carted down to the creek or washed near the shaft, from a water hole, by the latter method, although the expense of carting is saved, yet the thickness of the water carries away the fine gold; before being washed in the cradle it is first thoroughly puddled or moistened in a long trough or common washing tub!

Ridpath also notes that the gold mined from the creek bed was ‘very easily sought, requiring only to be shovelled once into the cradle, to be washed,’ (i.e.: no puddling was required.)

Once the earth had been ‘puddled’, and the hard lumps had been dissolved, the gold was roughly separated from the wash dirt using one of three devices:

The gold cradle was both cheap and portable, making it the most common gross method of separating the gold from wash dirt in the early days of the gold rush. As Ridpath offers, ‘perhaps you are already acquainted with this machine, one could have no clear notion of it, unless it is seen illustrated’.

I detail the use of this ‘machine’ with photos in an earlier post, Cradling for Gold in the Woolshed Valley. 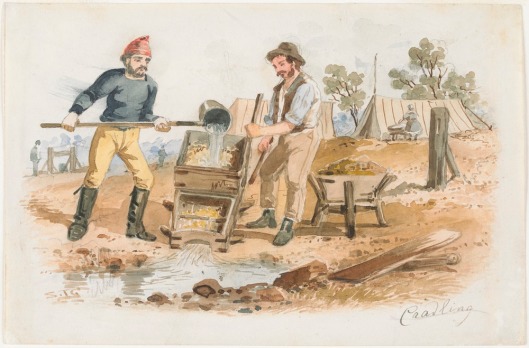 The second most common piece of equipment was the ‘Long Tom’, often shortened to ‘Tom’:

…there are two other machines on a more expensive scale used for washing gold, both Californian in origin, one is called a Long Tom, averaging 5 feet in length, /2 feet in breadth and half that in height, this is always fixed in a creek, so that there is always a stream of water running through it, the washing stuff is put into this, then shovelled backwards and forwards till it is thoroughly moistened, when the gold is carried down by the force of the stream to the other end through perforated sheet iron (to prevent the stones mixing with the finer dirt) into ripple box whence it is taken out and cleaned in a tin dish…

The ‘ripple box’ was a false bottom on the Long Tom, which was fitted with riffles — bars or cleats which would catch the heavier gold while the flowing water washed the lighter material away. (‘Ripples’ was the Australian term for ‘riffles’.)

the other machine is a sluice, shaped like a Long Tom, but considerably longer, unlike the latter, the water is conveyed from a distance by means of a hose, the length of the sluice is about sixty feet sometimes less, it is usual for about two or three parties to own them, and to employ men to work them at the rate of one pound per day, their being able to wash so much stuff during the day enables them to make the rejected stuff of others profitable, who cannot get through so much in the same time, there was no sluice erected on this creek, until it was abandoned by everyone else’.

there was no sluice erected on this creek, until it was abandoned by everyone else

Washing the gold in a tin dish (gold pan)

The final step in the process was to take whatever remained in the the bottom of the Cradle, or caught in the ripples of the Long Tom or Californian sluice, and wash this in a tin dish, gently removing any heavier material that wasn’t gold (commonly tin dioxide, aka ‘black sand’). Then all that remained was to weigh the gold and divide the proceeds between the party.

The process of mining gold on Spring Creek was relatively simple compared to that on diggings known as Reid’s Creek — downstream from the Spring Creek diggings, about 4 miles distant. The Reid’s Creek diggings presented more arduous and complicated prospects for miners (which arguably also made them a grumpy and rebellious lot), for reasons I will detail in the next post. I promise it will be shorter.

1. All the quotes in this article come from between pages 9-16 of Edward Ridpath’s journal: Edward Ridpath, Journal, transcription of letters to his father, possibly in his own hand, 1850-53? [manuscript MS 8759], State Library of Victoria, Box 1012/4 [Box also includes his gold license from 3 August 1853], except where I have noted that they come from William Howitt, in which case they have been drawn from Chapter 10 of Land, Labour and Gold (1855).