With the Chiltern-Mt Pilot National Park on our doorstep, the residents of Beechworth get to see some amazing wildlife. But has the local fauna changed since the gold rush? And is there anything still living in our forests that we don’t really know about? 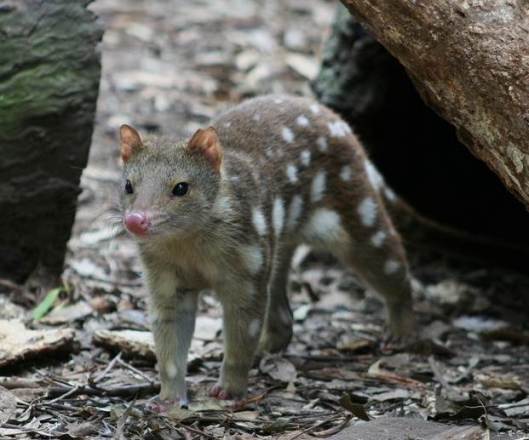 It was an interesting thing to read, and yet also devastating: the diary entry of American gold digger Gordon Tucker from 4 July 1854, who says he celebrated American Independence Day in Beechworth by ‘killing native cats’. [1] The glorious cat-like creature he was referring to was the Tiger Quoll (Dasyurus maculatus, sometimes also referred to as a ‘Spot-tailed Quoll‘).

Until this point, it had never occurred to me that a large carnivorous marsupial like the Tiger Quoll had once lived around Beechworth, let alone in such numbers that hunting them could be considered a day’s sport. So you can imagine my excitement when Mick Webster (long-time Friends of the Chiltern Mt Pilot National Park member) and Cathryn Mahon (Southern Cross Wildlife and Vermin Management) came across several ‘scats’ that look like they’ve come from a Tiger Quoll, while walking near Mt Pilot last September (2016). These scats have been sent away for scientific analysis, so it is yet to be confirmed whether Beechworth still has Tiger Quolls roaming its forests. Let’s hope so.

And there are other animals mentioned in the letters and diaries of gold diggers from the 1850s that are virtually unseen around Beechworth today. In November 1852, William Murdoch (a policeman stationed at the Commissioner’s Camp) wrote that, ‘One of the men shot a large flying squirrel its length from the nose to the tip of the tail four feet. The breadth from wing to wing two and half feet. Its back and upper parts outside the wings of a beautiful black fur. The belly white having a pouch.’ This is undoubtedly a reference to the Greater Glider (Petauroides volans), a huge glider with a long tail, that come in colours ranging from black and white to black and tan, and brown and white.

The Greater Glider is an arboreal species which is now under threat, for the reason that they don’t like to touch the ground ever, and have a huge ‘wing-span’, meaning that they need to continuously glide between very tall, widely spaced trees, just to get around. That Greater Gliders once lived around Beechworth also tells you about the forest that once existed: that Beechworth had old-growth forests of mammoth trees, mature enough to have the height and hollows that could sustain the Greater Glider. In any case, I’m told there are still some Greater Gliders in the hills at Barranduda.

Having described the Greater Glider, William Murdoch continued, ‘[The men also] shot a kangaroo rat[,] like a rat in the head but shaped otherwise like a kangaroo[,] in size, not bigger than a rabbit with soft fur the colour of a Roe Deer. In its pouch was a youngster a new born.’ [2] This mostly likely would have been a Bandicoot, but it’s impossible to tell whether it was a Long-nosed Bandicoot (Perameles nasuta) or a Southern Brown Bandicoot (Isoodon obesulus). I’ve only ever seen one Bandicoot in the last 25 years, running across a road at Whorouly. There’s also a small chance that the animal referred to here is not a Bandicoot, but a Rufous Bettong (aka, Rufous Rat-kangaroo, Aepyprymnus rufescens), which used to be found along the Murray River.

Finally, the other animal occasionally mentioned in gold rush diaries that has now been hunted and inter-bred out of existence in the wild, is the Dingo. Wrote Murdoch, ‘Saw a tame native dog which if in a Scottish wild would pass for Mr. Fox his shape and fur being the same bushy tail with a white spot at the point. The only difference I could see might be a shorter nose and a more erect carriage.’ [3] A. Waight also reported in a letter to his brother, ‘There are plenty of what we call Curiosities at home in these parts, I have seen Kangaroos, Wallabys, Native Dogs, Cockatoos, both black and White.’ [4] Unfortunately, the days when the howling of packs of wild dingoes could be heard in the hills of North East Victoria at night, are long gone.

The diggers of the Beechworth gold rush mention a great many other animals which remain relatively common around Beechworth today, particularly the goanna (usually described as an ‘iguana’), snakes, and ‘opossums’. Strangely enough, I am yet to come across a single mention of the animal which growls like a zombie in the trees just outside my bedroom window at night, the Koala.

[2] William Murdoch, A Journey to Australia in 1852 and Peregrinations in that Land of Dirt and Gold, unpublished diary manuscript (digital form), held by the Robert O-Hara Burke Memorial Museum. This entry: 26 November 1852.

4 thoughts on “Wildlife during the Gold Rush: fauna in Beechworth, then and now.”